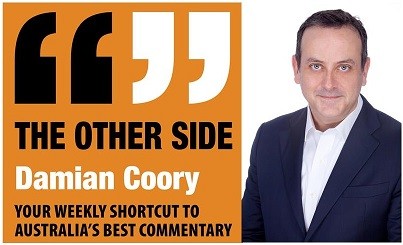 I started my new Australian liberty-focused podcast “The Other Side Australia” five weeks ago upon returning to live back home after spending 20 years in Asia.  I was disturbed by the change in the culture I’d seen over that time: the apparent blind acceptance of “big government” particularly concerned me, given that I spent much of my time in Asia living in Hong Kong, a place that was putting everything on the line to maintain its freedom from the biggest and baddest government of them all.

I never dreamed that within the first month or so of returning home and starting my show,

that we’d be seeing the worst piece of legislation – from a civil liberties perspective – put before an Australian parliament in my lifetime.  And if, in my slightly-left-leaning youth, you’d have told me that a Labor party government would be introducing it, I’d have laughed in your face.

The word draconian has been made acceptable lately. “We need draconian laws to manage this crisis” we are told.  That of course is nonsense. New South Wales and many other states and nations have managed the crisis just as successfully as Victoria – or far better – without anything like the extreme powers being proposed in this latest legislation. Even in terms of this new dangerously obedient government-loving Australia, where we accept draconian laws and applaud our leaders with high approval ratings for bringing them upon us, these laws are really draconian – in the very worst sense of the word.

So, what is in this Bill that has now already been passed by the lower house of the Victorian state parliament (because Labor has the majority of course) and in a couple of weeks has to pass through the upper house, where minor parties hold the balance of power?

“The Omnibus (Emergency Measures) Bill” allows the Victorian government to recruit what will be called  “designated authorised officers”.  These ‘public servants with a badge’ would have the  power to come into your house, and arrest you and put you in jail.  Without a trial.  Without a warrant.

As The Age newspaper put it, the bill “hands power to Health Department-appointed authorised officers to detain anyone they “reasonably believe” may negligently spread the virus.”

These officers will be public servants, or – wait for it – anyone appointed by the health department.   They can come into your house and arrest you. Probably in front of your kids and in your pyjamas and even if you haven’t said anything on social media yet but the authorised officer thinks that you maybe will, tomorrow.

And there’s the really disturbing bit that should have every sane person in the nation on the streets in protest, if it wasn’t already a crime to hit the streets and protest:  they can take you away and put you in jail even if you haven’t done anything wrong.

All they have to do is say that they believe you were ‘likely” to commit an offence. In the future. Maybe.

But it’s OK, says Dan Andrews, because these officers have to have “appropriate” skills.  These skills are very broadly defined in the bill.

So, I guess given Dan’s success with security guards, he thinks we should trust his judgement about who to hand these draconian powers to.  Right.

Not wanting be included among  the many childish humans on Twitter,  I decided to look up the generally accepted definition of a “police state.”   I grew up in Joh Bjelke Petersen’s Queensland after all, and as a young idealistic 20-something I had campaigned  against his “police special branch” – the secret police in their white shirts – who would occasionally go around planting drugs on uni students and arresting them, then verballing them by making up things they had never said and claiming them as true in court. Those were not good times to disagree with the government in Queensland.  Imagine Anastasia Palaszczuk, Jackie Trad and Jeanette Young with their own dodgy police force.  Joh was a great job creator and business builder and did much for Queensland, he was no Liberal, he was an agri-socialist authoritarian conservative.

And now we have this lovely legislation.  From an authoritarian Labor government this time.   Unlike Queensland which has only one chamber of parliament, Victoria has an upper house, the Legislative Council. The bill has to pass that before it becomes law.

Wikipedia defines a police state as a government that exercises power through the power of the police force, adding that “since the beginning of the 20th century it has taken on an emotional and derogatory meaning by describing an undesirable state of living characterized by the overbearing presence of the civil authorities.”

Sounds like Covid19 Dan Andrews Victoria to me. I think he passes the Police State definition test.

18 Queen’s Counsels came out to condemn the proposed laws this week including a former High Court Judge and two former Federal Court judges. They warned the emergency measures, would result in “unprecedented, excessive” powers. And then, on Wednesday, Wendy Harris QC, President of The Victorian Bar Association, wrote to the Andrews government to warn the  new laws could breach the state’s human rights charter and allow citizens to be placed in arbitrary detention. The Age reported Harris said “potentially untrained and unprofessional” people appointed as authorised officers could be enforcing rules that “cannot be justified. Unconstrained and undefined subjective powers naturally invite the tendency to exercise them to the fullest, and in breach of human rights,”

Yeah, no kidding.  Give a public servant a badge and some authority and you think they’re going to pass up the chance to play real life cops and robbers?  Nazi Germany taught us all we need to know about human psychology on that front.  Dan Andrews and Labor must have missed that day at school.

The Vice-president of the Australian Bar Association, Mathew Collins QC, said the ABA “shares the concerns expressed by the Victorian Bar”.

The lawyers are all – quite understandably – very professional and polite.

But let’s be clear: this bill is an abomination of everything it means to live in a free, liberal democratic nation.  And the failure of the federal government to step in and stop it is also disgraceful.  There’s no excuse. The Australian Constitution gives the federal parliament the power to pass laws that over-ride state laws.  We shouldn’t have to beg, Mr Morrison.  We put you in power for a reason.  You won the leadership and the election on ideological grounds. It’s time to step up.

Damian Coory is a former Australian radio and TV journalist who hosts and produces the weekly Australian politics and news summary podcast THE OTHER SIDE AUSTRALIA. It can be found on You Tube here:  https://www.youtube.com/channel/UCUaFGNz6NTvrA2dHWUTy7RQ and Spotify here:  https://open.spotify.com/show/0YpuZH3ZtwbcIcyhGTVxnQ