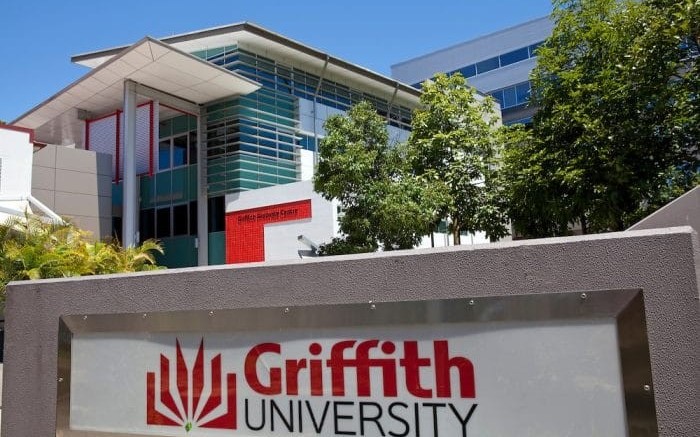 I would have thought in these days or the feminazi and the #MeToo movement any derision of women, especially those of a sexually abusive nature would be frowned upon and scorned. Obviously by the vile artwork displayed concerning the Virgin Mary at Griffith University in South Brisbane proves how naive I can be.
No doubt if this had been a modern celebrity or even a nobody coming out screaming abuse after contemplating it for twenty or thirty years there would have been an outcry in our media, even without corroborating evidence. After all, we are told time and again of the importance of believing any potential victim, forget the concept of innocent before proven guilty.
While not quite that extreme I am all for supporting potential victims of abuse whether they be women, children or even in some circumstances, men. I also have no problem with passing the toughest of sentences on those guilty of abuse, but only where their guilt has been proven beyond a reasonable doubt.
So it amuses me that the cacophony of shrill voices any time even the presumption of abuse is alleged against women are so quiet when one of the most famous amongst them is the target of attack, derision and abuse.
Why is it, that in these times that artwork depicting the Virgin Mary cradling a giant penis in her lap is deemed acceptable by the powers that be at Griffith University in South Brisbane?
Is the reason that Christians and Christianity are targets for attack and derision because those mounting those attacks are aware that Christians will turn the other cheek?
If so isn’t this a poorer reflection upon those deriding Christianity than it is on Christians themselves? After all what sort of person mounts an attack on a person or a group that won’t or can’t defend themselves. There can be only one word that describes such a person and that is a coward!
Well if such a person is a coward, then what does that make Griffith University? They chose to display a provocative and offensive piece of art depicting the Virgin Mary mother of Jesus with the University’s Professor Scott Harrison claiming it was displayed at the Griffith University Art Museum to “support arts role in society to encourage healthy debate”.
Excuse me? Healthy debate?
Juan Davila’s 1985 painting the “Holy Family” based on Michelangelo’s sculpture “The Pieta” 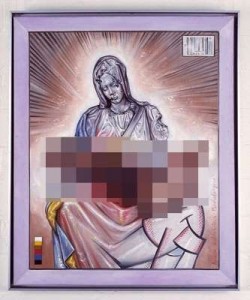 housed in the Vatican is simply offensive, there is no need for any sort of debate let alone a healthy one as that is not possible in this instance.
I don’t believe art that is created for the purposes of derision of any faith is purposeful nor constructive. Art should be about the best that is within us, sure it can be a force to encourage different thinking and civilised debate, but why do some of these artists seem to think Christian beliefs and values are fair game for attacks that are both derisive and offensive?
I would take them more seriously if they came up with similar artwork about the Islamic faith for example, but we won’t see that for Islam doesn’t practice the turning of the other cheek, forgiveness and understanding in the same way that the Christian faith does, now does it. How about some art deriding Satanism or Atheism? What about art deriding child marriages, the barbaric practices of stoning women to death for adultery or the throwing of gay men of buildings to their deaths.
Where are our courageous artists challenging these ideas and encouraging debate in these instances? 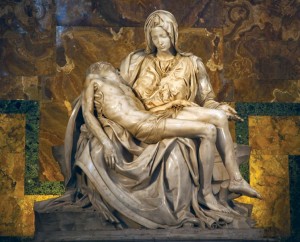 How about we have some art depicting the child abuse and abuse of women by our powerful celebrities and politicians. There is plenty of inspiration for our leftie artists to wrap their hands around in today’s world. Would they dare produce artwork that was offensive to our indigenous community? Maybe something that derides Ayres Rock?

Now we can’t do that, can we? Of course not and nor should we.
Yet there is no problem it seems, for the powers that be at Griffith University to present something that should be considered offensive to all of us, not just Christians. Never mind though, Christian groups will cop it sweet, they may jump up and down initially but any furore will die down after a little time. After all, it’s the woke thing to have a go at Christians and their faith, isn’t everybody doing it these days?
And there it is, the mob mentality that can justify any inconsistency and hypocrisy.
A collection of cowards with a blood lust making anything pure a target for small-minded attacks and hate. You don’t need to be a Christian to respect that faiths valuable contribution to our society and yes that’s right I said valuable. Yes, Christian churches and faiths have had to endure poor publicity, much of it its own making, but the story of the virgin Mary is one that should be embraced about a pure person full of love, compassion and forgiveness.
In these days and times of the MeToo movement where are the voices of outrage against the abuse directed at what can be legitimately labelled our first prominent female rock star? Why do some feel the need to taint her history, her reputation, her status within our world? Surely things are grim enough today without the need to tarnish one of the few things that in our human journey has been pure and loving.
Only a small-minded coward would want to dimish that. Well, it seems we have a bunch of them at Griffith University. I won’t hold my breath waiting for these mental and moral behemoths at this University to display similar artwork that is just as offensive for example to Islam’s Prophet Muhammad.
Now that would need some courage, let’s just stick with attacking those soft, easy to target Christians.
SHARE TWEET PIN SHARE

Our Government and Democracy is broken