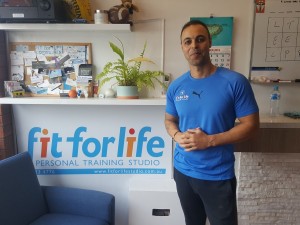 The first thing you notice when you walk past the Fit for Life fitness studio in Sandringham is its location. Across the road from the Sandringham Hotel and meters from the beach this is a great bit of commercial real estate and even more, importantly would provide an array of options for physical activity.

Vic started out as a fitness instructor when he was twenty and has been in the industry ever since which accumulates to years now. When Vic first started there wasn’t a lot of gyms around, compare that today when you seem to drive past one on every block. I was curious in our interview how Vic had made his business stand out against the pack in his time at the Fit for Life Studio. It became apparent fairly quickly. 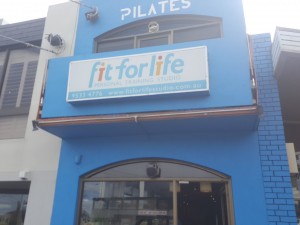 The thing that you noticed straight away was that Vic has an infectious personality, he speaks with a mix of energy, enthusiasm and in a personable way that makes you feel welcome immediately

Vic originally came from the South Eastern suburbs from the Berwick area and went through a few schools where his academic side of things was good, but he never took the study side of things too seriously as he was absorbed in his sport especially his AFL football. Vic played a variety of sport as a kid including soccer, basketball and, karate before choosing to become serious about his AFL football.

This bore fruit when he was recruited by the St Kilda football club enjoying two years at the club where he played under Ken Sheldon, Malcolm Blight and Tim Watson. It proved to be an interesting time with some legendary players at the club such as Barry Hall, Tony Locket and the late Danny Frawley. Typically at that time, there were up and down times at St Kilda, but it would turn out to be a defining influence in Vic’s ultimate career pathway.

Vic especially enjoyed his time playing Ken Sheldon as his coach at Casey which was effectively the St Kilda reserves and enjoyed associating with the St Kilda trainers and fitness staff so much so that they ignited the fire inside Vic to pursue fitness training as he obtained his fitness certificates from his time at St Kilda. Considering all of this it was not surprising he pursued a career in fitness instruction.

Once Vic’s time at St Kilda was finished his father, who was an engineer, was pushing Vic down that 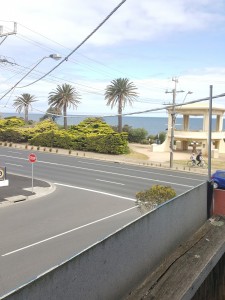 same pathway so much so that Vic actually started an engineering course. Vic, however, wasn’t passionate in this field and found himself always coming back to the idea of fitness instruction which seemed a natural evolution from his footy.

So at twenty years of age made the move to pursue a career in fitness instruction. Initially, Vic started out in the industry working at a variety of Melbourne gyms. He ended up at St Kilda Sea baths which were one of the largest in Melbourne and was a natural fit with many football clubs using the venue as most for their recovery sessions.

Vic worked well there, so much so that they wanted him to be a permanent manager, but Vic had bigger ambitions to break out on his own and did so when he launched the Fit for Life Studio in 2008/2009. Vic has never looked back since, as he loved the area, his clientele and his location.

In fact, Vic can’t speak highly enough of the people within his community.

Like any start-up business, the initial times were challenged and Vic had to finance it by selling his house to afford the lease, the outfit of the property and the equipment that goes with a fitness gym. Vic originally started with himself and one part-timer and built from there. One advantage that Vic had was a loyal following of clients who followed him from other gyms and his football connections which gave him a database of customers straight away to get his business off on a positive foot. From those beginnings ten years ago, Vic estimates he still has 30% of his original clients still on his database. 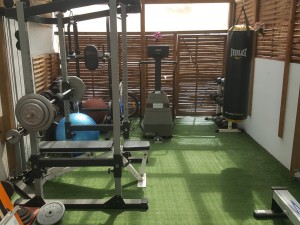 Vic is a physiologist which targeted injuries and disability when Vic started, but this has evolved with the introduction of the NDIS program. The studio also provides exercise physiology, Pilates, personal training, in-home training and community, social and recreational activities.

On the administrative side of things Vic has an advantage over other businesses, In the fitness industry instructors have to have their own ABN number and pretty much work as a sub-contractor. This allows them to look after their tax commitments, superannuation and associated salary administration. This is a great advantage for any business owner let alone one a start-up business.

Interestingly, I discovered through Vic that most instructors at most fitness gyms are required to pay a rental fee to be able to work in a gym and use their equipment, this is especially so at the bigger commercial gyms. This can make life difficult for instructors as they need to earn a certain amount to cover costs before making a profit and salary for themselves. This is made even worse when you consider that those same gyms that charge rent for space also charge instructors for courses to give them the qualification to be able to be an instructor. 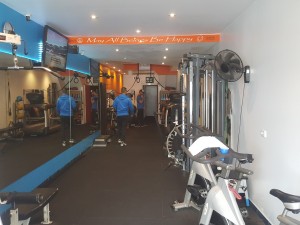 after being in the industry for twelve months or so the attrition rate among fitness instructors is high, which was another motivation for Vic to start out on his own. As you can imagine, Vic wasn’t a fan of this system and doesn’t have it in place at his studio which he believes not only makes his studio a destination of choice for quality fitness instructors but also helps him in the retention of quality staff.

From Vic’s perspective, the key to his studio success is the way he treats and serves his clientele. Vic looks to build friendships and bonds with his customers and finds different activities for them that will stimulate and motivate them. Vic places importance on setting goals and then maintaining achievements while being honest with his clients in that journey. Another aspect Vic focuses on creating a welcoming atmosphere for his clients at the studio itself, with them being able to bring in their own music, family and even pets. The studio provides drinks and towels to make things as convenient as possible for people attending a session.

Vic has relied on the word of mouth of his client base to grow the business and has never advertised in his ten years in business, which is quite remarkable and just shows he is true to his word about how he treats both his staff and customers.

Vic is now keen to get the word out about his NDIS program that he is offering through the studio, so is now looking at dipping the toe into the advertising and marketing area for the first time. Through their NDIS program, the main section is the physiological part where the studio offers Pilates for NDIS clients and groups, which is more clinical and designed for their specific needs.

The studio is more than just fitness sessions and also provide social and recreational activities such as go-karting, mountain trekking, beach walking and even sky diving. They do these activities in groups by hiring a van, picking up their clients and travelling to where these activities are conducted. These are conducted in the summer and not only build social bonds but build confidence in these participants.

The NDIS program has been operating out of the studio for just on twelves months and Vic sees this as an area of growth for his business. The location of the studio is also ideal, with it right next to the beach and the walking trails along it provides a wide range of options for fitness and well-being activities.

Vic actually has a wide variety of clients from corporate customers to mum’s and their kids, sportspeople and people with disabilities. Family group training is also available but Vic restricts those groups to no more than three or four people at a time, so they can cater them to their clients more specific needs while making those sessions more personable.  Pilates is one exercise program that offers larger groups.

Vic does do fitness training with local sports clubs and schools and venues such as Bailey House in Brighton whose students are autistic. These have come through affiliations with clients who come through the studio. The studio conducts thirty sessions in the morning and thirty in the evening every day. with the gym running between 6:00 am and 9:00 pm. That’s a long day!

Vic is looking to branch out and establish more studios in Brighton and Port Melbourne in coming years and wants to his business to cover the Bayside area. So there is still some serious ambition within Vic for his business. Vic doesn’t like to micro-manage his staff and gives them significant freedom when conducting sessions, as he remembers how it was when he first started in the industry. His staff love that approach and provide great service in return for that freedom.

If Vic was to give advice to any person contemplating a business he would advise them to focus on location, customer service, being good with people and having a passion to help them. Vic handles his own books and administration tasks, which comes naturally to him.

On the bureaucracy side of things Vic would like to see governments help out small businesses in employing more people through lower taxation costs and identifies the costs of opening on a public holiday as an example of a barrier to small businesses being able to open and employ staff. Vic would also like to see some government assistance to encourage more people to get  into personal training as he believes with a healthier and happier population that would offsets costs in health care in the longer term as a result. It’s a valid argument.

Vic’s would love to have you come in and try his Studio as your health is number one, no matter what else you have in your life if you don’t have your health you don’t have the happiness or fitness to enjoy your life.  As an example Vic’s oldest client is 85 years of age yet he still plays golf and tennis and has just come back from a skiing trip in the snowfield. Interestingly he does smoke but through the exercise regime he participates through at Vic’s studio and his activities outside of this actually helps to keep him healthy enough counters his smoking.

Vic would love to be in a position to help as many people as he can to achieve similar results. If you would be interested then check out the studio’s brochure by CLICKING HERE or visit their website below.