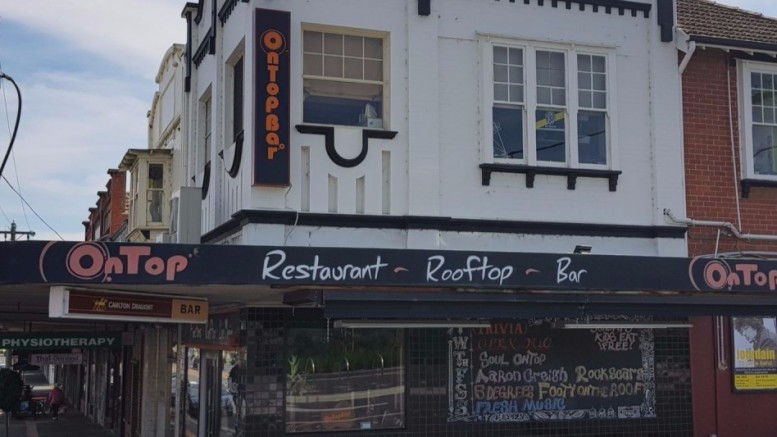 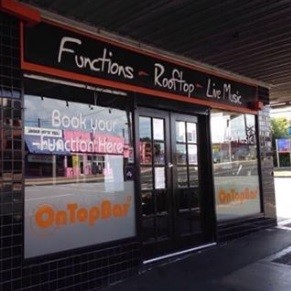 because I had attended a Xmas breakup with my work colleague back in 2015 and the place simply resonated with me.

So I was excited to have the chance to write a story about the venue.

The first thing that hits you about OTB is the atmosphere of the venue. It’s a real music venue with what I consider a real traditional bar unlike many venues these days. At our breakup listening to live music enjoying a beer with friends took me back to what out pubs were like back in the eighties when I was in my twenties.

As soon as we started our interview with owner Sarah(SJ as she prefers to be known) and Paul who plays, works and most possibly lives at the venue and set up our interview, is that you could see the passion they have for the business, the venue, but most importantly their people, their patrons, their staff and their musicians.

“Lots of people that go overseas, this bar is the first place that they come back to. They literally get off their plane collect their suitcase and head straight for the “on Top Bar”, it’s incredible how many people call this little bar in Ormond home” 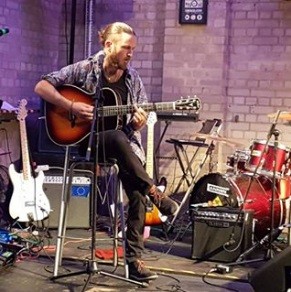 The immediate impact, at least for me, about the OTB is that it is an old school pub from the golden era of Australian music of the ’80s and ’90s. With the introduction of pokies into pubs and clubs so many venues lost their soul & nostalgia at least to me. Walking into On Top the 80’s and 90’s came rushing back to me.

For SJ and Paul, it was intimidating to create a pub and not to have pokies as you worry about whether you can make money to make the venue viable or whether customers come back and patronise the venue. At they demonstrated both courage and integrity to towards their mission at On Top and decided to buck the trend and focus on live music, local musicians, great food and a great atmosphere.

The pub prides itself on its supportive environment, especially towards their musicians and especially towards rookie ones whose gig at On Top may be there first one live in front of an audience. This is especially so on their open mike nights held on Tuesdays where there can be a wide variety of performers from a solo artist on a ukulele, to a three-piece band with teenagers playing for the first time in front of an audience comprised of their parents, to two reggae guys and their guitar.

On Fridays and Saturdays, they revert to contemporary rock from the ’70s 80’s and ’90s. 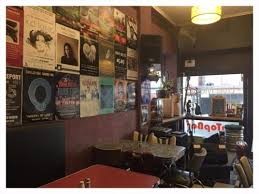 things. Sarah Rzek, The Pearce Brothers, Brooke Taylor & Delsinki to name just a few.  Sarah Rzek actually had her EP(extended play record) launch at the On Top Bar and is managed by the legendary Molly Meldrum and has signed with Mushroom records.

This is one thing you can sense that Sarah and Paul are extremely proud of. In fact, a core part of the business is to create a caring and nurturing environment for these local musicians, with many of them even when achieving success treating the On Top Bar as a second home.

While some venues simply book a group or a musician, let them play and provide them with a cheque on the way out, staff and musicians at On Top  support each other not only in their efforts but through things such as networking referring each other to different gigs, while SJ even has other venues coming to her to source local talent. 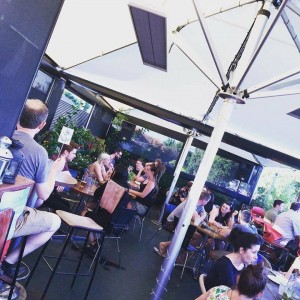 The bar has been running for ten years. The idea for the business started from SJ and her husband Peter. SJ was working in a fine dining venue when she lost her job after shouting across a room as to whether a diner wanted another drink. This apparently goes against fine dining etiquette and SJ was advised she would be better behind a bar, considering SJ grew up in a pub with her parents she didn’t disagree and instead took that advice and went and bought a pub. She has never looked back.

SJ’s goal was simply to create a pub where people could hang out and enjoy themselves but initially wasn’t sure what direction to take the business until one night that had a band play on the rooftop of the pub. The night was a success with great musicians and a huge turnout of patrons which led them to the realisation “hang on a minute there just simply is not enough live venues like this in Melbourne.”

As they say, the rest is history

Mondays are the only night OTB is not open, with Wednesday the biggest night of the week. A variety of groups and clubs patronise the pub for functions. SJ has the goal of attracting more patrons to the venue for their food across all age groups. She can’t explain it but the venue has a vibrant and varied demographic of ages.

The venue is open 4:00 pm to 1:00 pm, and offers a great menu with a dedicated Chef and staff aimed at making that menu as good as possible.

Another unique feature is that unlike other live music venues OTB doesn’t charge an entry fee to see the live music. You can walk in and if you don’t like what’s in front of you, you can leave straight away without it costing you a thing. At OTB they back their people and their patrons.

The On Top Bar is located on North Road right next to the train station making it extremely convenient for those looking for a good night out but not wanting to drive.

OTB employs full time and casual staff and faces all the normal challenges that any business face. OTB has always had a good relationship with the council and their various regulations and their neighbours.

The most disappointing time for the business and a period which nearly led them to shut the doors was when the State Government decided to remove the railway level crossing at Ormond station. Every business in the Ormond strip struggled through that time and none were given financial assistance during this period, the business took such a hit that they are still recovering from that time. Fortunately, business for OTB both before and after those works was very good enabling them to survive. Talking to other businesses on North road they endured the same issue. Hopefully, future governments can redress these businesses losses; it certainly demonstrates a lack of understanding of how any business can be affected by these sorts of works.

Amazingly during this time OTB still had to pay rates, still had to pay to have table and chairs set up on footpaths just to satisfy local council by-laws, but like so many businesses they lost patrons through government decisions that had no control over or input into while those major works occurred. As SJ said, “that was a very, very hard time.” To make matters worse once the works were completed the landlord raised the rent on the lease on their property. 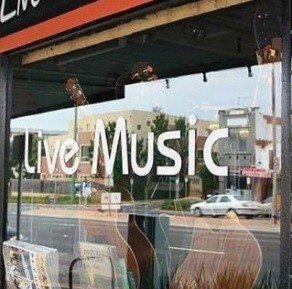 that at the OTB. Their patrons have multiple options, whether it’s having a meal, a beer with mates, live music, a game of pool, a cabaret function, or sitting on the rooftop during a balmy summer’s night. There is not a pokie machine in sight, but there is so much atmosphere. There are plenty of different rooms within the pub also for patrons to enjoy and they all have their own character making the OTB unique.

SJ and Paul are passionate about what they do at OTB and certainly understand the challenges in keeping a business open and running, but it is their passion for their patrons, their staff and their musicians that keep them at it. It’s refreshing to see.

Pubs like this were widespread in the eighties and nineties both in the city and the country making it easier for musicians back then to tour and make a living. It’s no easy now and OTB satisfies its own unique niche in the market. One of their favourite things about the business is the live music and simply watching the variety of people who come through their bar and grow as individuals while considering the venue a place they can call home.

Local musicians and groups of all types and ages should be grateful to the ownership and staff at OTB. For their sakes and an old groupie like me,  let’s hope that continues for years to come.

To check out the On Top Bar go to their website and social media links listed below.

Have we seen the sequel of the Reichstag Fire and the arrival of Big Tech Fascism?