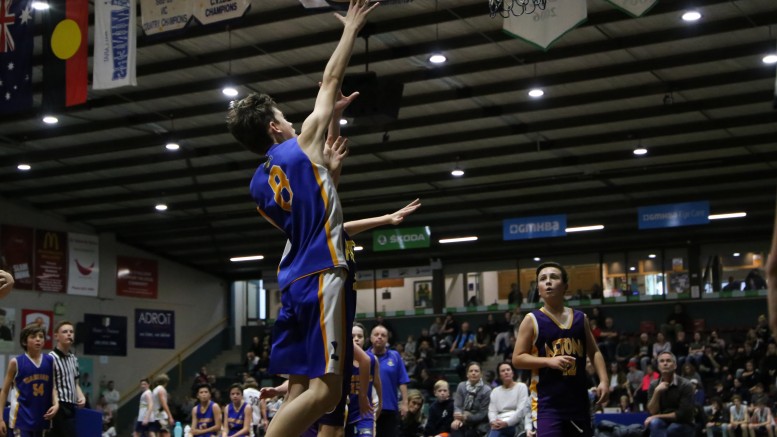 Jack Clarke on the drive.

The Glen Eira Warriors U16 Boys basketball team are looking forward to shaking off the holiday cobwebs when they resume their basketball season in the country’s largest junior basketball tournament.

Playing together under the “Keysborough Cougars” banner, this team won their U/14 division last season, but have gotten off to a slow start during the grading phase of the current season recording only the one win so far.

Having kept the team together from U/14’s into the U16 age group this season,  this “all bottom aged team” has had to adjust to playing against older and stronger opponents which have presented its issues. Having said that in all but one match the boys have been extremely competitive and unlucky not to have won a few more matches.

After enjoying their Xmas and New Years break, the boys have now started a holiday training camp to prepare for their next challenge, the Eltham Dandenong Junior Basketball Tournament. This tournament started in 1974 and since that time it has grown into the largest junior basketball tournament conducted in the Southern Hemisphere. The tournament sees hundreds of teams from around Melbourne, Victoria, Australia and even overseas compete at venues across Melbourne. The event is massive and the competition is fierce.

The tournament is used by most teams to get back into game mode after holidays, as they prepare for the season resumption the following Friday. This is no different for this Warriors team who has enjoyed significant success at tournaments over the years. With a full complement of players available the squad is looking forward to this weekend and the season resumption afterwards.

Warriors coach Bob Mann sets out his team goals pretty clearly. “This year is going to be a development year for our boys, so while we want to win, there needs to be an emphasis on skill development, game education and adjusting to banging up against bigger bodies, which is always tough at this age. As our team is all bottom age, the group will stay together in U16’s again next season. This is quite unusual and will place us in a strong position for the 2020 season if we manage this 2019 season correctly.”

Bob has reason to be hopeful with the return of young gun Michael Aminov to his team’s ranks. Michael played at Hawthorn last season and help lead his team into the Grand Final of the states top grade, the Victorian Championships. Michael last season would have ranked in the top six players in the State, so Bob and the boys are glad to have him back. Michael returned to this team as it was his original team and coach from U10’s and he wants to lead them to the States top grade next season.

Bob also has another athletic talent in Mason Paewai. He is strong, mobile, tall and co-ordinated. “He doesn’t even know yet how good he can be, our goals is to make him realise his potential by season’s end.” enthuses Bob.

“We have another developing forward in Aher Humphrey, who had an outstanding game in the team’s Grand Final win last year and a player who will end up being tall with the ability to play up to three positions. With the right development, Asher will be very important to us.”

After that, the squad is made up of both shooting and point guards. “We have some athletic boys in that group, two of them are highly skilled in Elliott Brown and Jack Clarke with Josh Lai and Felix McShane not far behind them. Will Gordon and Jack Giblin are new to the team, but with the correct development will catch up quickly.” I am really confident that if the boys collectively develop a great work ethic that they will be capable of achieving great things in coming seasons. The foundation for that will be laid down this year.”

When queried about his goals for his team for the tournament, again Bob was pretty clear. “Game time for everybody, achieve some improvements in skill development and offensive and defensive structures and no injuries.”

If anybody should know the potential of a team at this level it’s Bob. Over a 23-year coaching career at this level, Bob has coached fifteen teams to the Victorian Championship grade, with a number of his boys going onto play at state, national and NBL level. He is confident about these boys chances as well, “This squad certainly has all the elements to make that level and even win at that level consistently, but it will all come down to the work ethic they develop in 2019, beginning with this tournament. We will see, I am certainly excited about overseeing their development”

Asked about weaknesses, Bob like every coach would like another tall type. ” Yeah, we are one and possibly two tall power types short of genuinely challenging. You can overcome this if the squad develops a certain level of skill, game knowledge and with great work ethic and effort, but I won’t be complaining if two bulls walk through my door.”

If you would be interested in your son trying out with Bob’s squad send him an email to bob_mann@warriorsbasketball.org