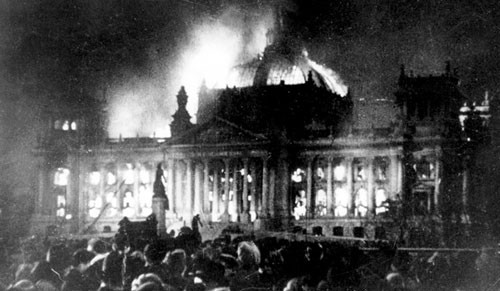 Nazi analogies should be used sparingly, but are often abused in the regularity of their use. Personally, I am extremely reluctant

to use them, yet the events of the past week ensures it's difficult to do anything but.

While mainstream media simply focuses on Twitter banning Trump. Virtually none of them are not reporting on the purging of millions of accounts on their platform who have conservative views or are supportive of Trump or both.

I say millions as my account was one of those affected by this action from Twitter. If my account in the backwater suburbs of Melbourne is being censored with just under two thousand followers, then there are millions and probably tens of millions of other people’s accounts being censored and restricted in the same manner. Worse, many of them, like Trump's account were suspended altogether. 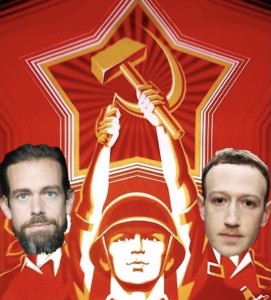 One of those who had is account suspended is a unique individual. Dr Zekri Palushi, who provided an article for this online paper, has a unique perspective on totalitarian regimes as he fled the Albanian one with his family for a better life here in Australia. Now he finds his ability to express himself identified and restricted, just because he has opposing views to those who have that power to censor him.

This action was taken with no warning to Dr Palushi.

Past leaders of totalitarian regimes would consider this modern-day censorship a Fascists nirvana.

Through the day, on Saturday the 9th of January, I sat and witnessed the follower numbers for my account drop by the hundreds in the space of fewer than twenty-four hours. Currently, I am down 300 followers and have been using Twitter since September 2011. In that time I have seen my following rise ever since and if I lost five followers in a day I would have been surprised.

While seeing my follower numbers decline, I also discovered hundreds of other people who are were on my feed experiencing the same phenomenon. Our common trait or even sin according to Big Tech, is that we all hold conservative views with many of us expressing support for President Trump.

All of this followed the suspension of not only Trump's Twitter and Facebook accounts but those of many of his major supporters. Google, Apple and Amazon are also going even further by looking to remove the social media platform Parler off the internet. Parler has become a refuge for people of conservative values looking to get away from the censorship of the Big Tech companies. while being open to everybody, no matter their politics or opinion.

Parler actually embraces freedom of thought, opinion and speech. That is a crime in some peoples warped thinking. So not only do the Big Tech Oligarchs want our speech and opinions off their platforms, they intend to remove any platforms we could move to that would support our expressions of thoughts and views.

Now for my Nazi comparison.

These events of the past week have a worrying similarity to three major events in the build-up of the Nazi movement in Germany in the 1930s and their ultimate seizure of government and power.

The first of these was the Reichstag fire of 1933 which was contrived to turn public opinion against any opponents of Hitler and the wider Nazi movement. It’s like the outrage directed at Trump supporters after the capitol building protest was ripped straight out of Adolf’s playbook.

Individuals, politicians and organisations who have for twelve months not only turned a blind eye to the violence of organisations such Antifa and BLM but instead encouraged or justified it, suddenly found a voice and decried the actions of these protestors. Never mind that compared to the billions of dollars of damage and the lives affected and lost in the Antifa  and BLM protests and riots over the previous twelve-months, what happened at the Capitol building pales into comparison.

The second event that screams imitation from the Big Tech Cabal was the ruthless seizure of control by the Nazi movement in the night of the long knives on June 30th, 1934. On this night, Hitler ordered his elite SS guards to murder the leaders of the Nazis SA Paramilitary group as he feared they had become too powerful and were a threat to his control of the Nazi party and movement. The SA's leader Ernst Röhm was executed that night along with other leaders of the SA and hundreds of other perceived opponents of Hitler.

Last Saturday, 9th of January was the IT virtual equivalent of this event. This time it was Trump’s turn along with anybody else seen as a supporter of his. 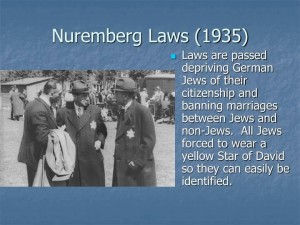 in Nürnberg on September 15, 1935. These laws deprived the Jewish citizens of Germany their rights on a vast scale. This lead to Jewish businesses being targeted and Jewish citizens being identified by the wearing of Star of David badges.

They were identified and targeted for discrimination and ultimately execution on a scale never seen before in human history. On Saturday 9th of January, 2020, millions of us with conservative views across the globe experienced a similar targeting through what can only be described as modern fascism facilitated by Big Tech algorithms.

On this day if you had conservative views, values or opinions, or worse express them, then you were identified, targeted and hit. Followers were removed and accounts suspended. Social Media platforms where you may move to such as Parler were targeted to be de-platformed unless they agreed to implement similar censorship. With the push of a button, millions across the globe were stamped with the virtual equivalent of the Nazi Star of David badge. This time it wasn't about being Jewish it was about being conservative or worse having the temerity to support Donald Trump. This discrimination and targeting as continued since. 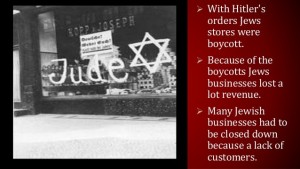 While sitting in front of my laptop and in shock at what I was witnessing; a modern-day purge in real time, I also witnessed many on the left celebrating this censorship and discrimination. This is similar to ordinary German citizens celebrating at the commencement of the crackdown of German Jews. As a history buff, the comparisons and similarities of all of this are glaringly obvious.

Worse than this is the realisation that with modern technology, is that any regime or organisation with totalitarian tendencies now has the ability to implement a discriminatory campaign against a group within our society at the push of a button. We already know that IT companies can collect our information, recognises our facial attributes and track where we live and when and where we travel. Its potential to oppress makes what Joseph Goebbels and his SS thugs achieved look like a scout group on a Sunday picnic.

The repercussions of what has just happened in the past week cannot be underestimated. History tells us that these similar actions conducted by the Nazi party were ignored or written off by good German and global citizens, including many within the Jewish community. What followed was the greatest human tragedy in world history.

Who will stand by and say nothing now? To do so is to risk not just having history repeating itself, but to do so on a magnified scale. What decides this is not a matter of conservatives standing up for themselves, but rather as to whether people with contrary views, opinions and politics will stand up and speak out on their behalf. 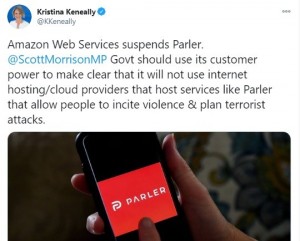 naïve. Kristina Kennelly is pushing the Prime Minister to penalise any hosting service companies that host the social platform, Parler. Her justification for this is that she asserts that people on Parler incite violence and even plan terrorism. She provides no proof of this accusation and conveniently ignores the thousands of instances of similar and much worse instances like this on other platforms. Her silence concerning this is deafening in regards to proof of her own fascist tendencies.

Her federal ALP colleague celebrated a call from a Facebook representative who gave Liberal MP Craig Kelly an ultimatum to take down a post with comments and reference links providing a scientific argument by Australian Professor Tom Borody about Ivermectin as a treatment for covid-19. So when they say listen to the science, it's only the science they want to hear that will justify their actions. 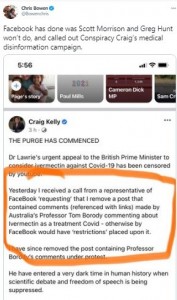 In any open democratic society that embraces freedoms of speech and opinion, there would never be an attempt to restrict or impose different speech and if there were, there would people from all places on the political scale voicing their opposition to it.

Instead, we have Australian politicians on the left embracing what effectively is Fascism. This makes me fear for our society and the potential dark days ahead that history tells us that in all likelihood will certainly come. The difference this time is at its epicentre in the USA they are looking to censor and demonise a section of their population that numbers over 75 million and in most instances are equipped with both arms and ammunition.

I doubt they will go quietly into the night and could lead to a domino effect that could plunge the rest of the globe into the same madness of nearly a century ago. If you doubt that then you’re a poor student of the greatest teacher of them all. Father time.

If you believe in prayer, now could be a good time to practice it.

Ashes to Ashes, hold on where’s the review

It’s time to get busy being a conservative online.