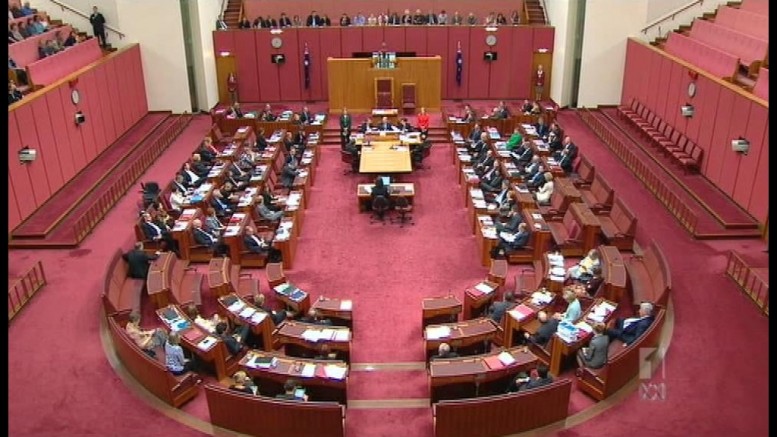 Our government and democracy is broken.

We often hear from our political class how wonderful our system of government is and how the will of the people decides our issues every three years at the federal level and every four at the state level through their respective elections.

Just like the climate change industry, it’s all a con. If our government was genuinely a reflection of the people’s views, then how do the politicians who represent the smallest group of electors hold the balance of power on an ongoing basis?

The Greens, Nick Xenephon’s party, the Liberal Democrats and most of the independents all get into parliament through preference voting for the upper house. Once there, they consistently obstruct the passage of legislation from the lower house, which on the whole is passed to them from the governing party who secured the majority of votes from the most recent election.

In effect, this is the minority of the voting public thumbing their noses at the majority. How is that democracy? Over the past ten years those politicians representing the minority, predominately the Greens, have stopped, obstructed and had changed legislation, laws and ultimately the will of the people. It has come to the point that even when the Liberal or Labour party win comfortably, what was previously a mandate for their legislative program, is now no longer the case.

This situation has directly lead to boats coming from Indonesia, higher immigration, detainees on Manos island, drownings at sea, massive higher government debt, the endless debate about same-sex marriage, the continued myth telling of climate change and its potential impact on the planet higher power prices and the security or provision of energy to consumers.

It has also brought into being issues that are dividing our nation. Through same-sex marriage, overblown indigenous rights, ignoring retirees and veterans while politicians stick their snouts in the trough over and over again, with the most recent example the massive rorting of the taxpayers to have Daniel Andrews government elected. His reaction, pretty much nothing to see here!

They wonder why their reputations are in the gutter. Where is the leadership? Where is the integrity? Where is the honour? Government members enjoy the words “the right honourable” in their titles as members of parliament. There is an irony in that!

Why are we producing such dysfunctional parliaments and parliamentarians?

I have two major theories on that, the first is the Senate, the upper house former PM Paul Keating labelled unrepresentative swill. How right he was!

The Senate was formed to be a house of review whose members would protect State’s rights, especially the smaller ones which, is why twelve senators are elected from each state despite any difference in size in population. This means that Tasmania with a population of just over 500,000 has the same representation as New South Wales that has a population of 7 million.

On a secondary point, how many senators in our times are elected due to their patriotism towards their states? How many Greens senators actually represent their state as opposed to their party’s nutty agendas and policies?

You need to qualify this by defending our nation’s founding fathers as who could have imagined by in the late 18th century that a group such as the greens could not only have formed but gone on to secure seats in parliament.

Times change, as should our parliament. Long gone is the need to protect State rights. Our nation commenced as a group of colonies with their own governments and laws, we have evolved in 117 years into a functional commonwealth of states and territories, maybe we need to evolve into a nation who governments have some chance to deliver what they promise in an election campaign. Governments that can be held accountable by the voting public for not implementing their various political agenda’s.

At the moment in our nation and parliament’s history, this is nigh on impossible unless the governing party in the lower house also has a majority of members in the upper house. This happens very rarely and results in poor governance, poor policy delivery and a lack of accountability of our federal governments.

Where governments are elected without a majority in the Senate, they need to negotiate with protagonist members in the upper house to have any hope of having some form of legislation being passed. This always results in one of two things happening, totally diluted legislation struggling to represent what was initially promised by the governing party in any preceding election campaign, or worse the promise of extraordinary spending in upper house members electorates or on their different agendas. This can lead to the worst sorts or pork barrelling just to give a government some semblance of hope of passing legislation.

This is magnified by who manages to get elected in the Senate. Australia’s preference system was put in place to ensure every person’s vote has value. Instead, the vote of a person becomes so diluted by the hordes of preference deals that any Joe Blow can find themselves fluking a spot in the Senate. Some fine examples of people who should never grace the floors of our federal parliament are the following current and former senators in Lee Rhiannon, Fraser Anning, Rod Culleton, Sarah Hanson-Young, Pauline Hanson, Jacqui Lambie, Nick McKim, Scott Ludlam, Ricky Muir. Note how many of them are greens.

Our main case in point out of that fine group is Ricky Muir, who seemed a nice enough guy, but also was

hopelessly out of his depth in the Federal parliament. Muir represented the Australian Motorists Enthusiasts Party (AMEP) in Victoria at the 2013 federal election and won on a record-low primary vote of 0.51 percent or 17,122 first preferences (coming 13th out of 34 groups), getting to the 14.3 percent quota from 23 group voting ticket party preferences:

A person securing such a small percentage of the vote but still becoming a national senator who can influence our countries legislation and laws I would suggest is not representative of the people’s will. It also makes for poor governance as the government on many occasions would have to go to a Senator like Ricky Muir cap in hand to pork barrel their way to a preferred outcome. Even worse a person not familiar with our system of government and easily influenced by others in the parliament may be manipulated into a stance that is not in the national interest.

How is this good for the country? Quite simply it is not.

I could go on about some of the green senators who only make it into parliament due to dubious preference deals. Our preference system is fundamentally flawed, it doesn’t give extra value to the citizen’s vote it dilutes it. In many democracies a simpler “first past the post” is in play and it was once in Australia as well. The old saying is that “the pathway to hell is paved with good intentions”, our preferential voting system is exactly that. Its origins were noble, but in reality, on the majority of occasions, it leads to a result that the majority of the voting public didn’t want.

We would propose two fundamental changes to our federal structure. First, we would remove preferential voting and return to the first past the post system. Sure not everybody’s vote will count, as it wouldn’t in a preferential system. For example, if I voted for the candidate that gained the majority of the first preferences, but he ultimately wasn’t elected as another candidate overtook via a complex set of preference deal, then how does my vote count or all those votes of the other that gave that candidate the majority of the first preferences? It doesn’t.

Secondly, we would propose to remove the Senate altogether. The house of review and the states has become the house of mindless obstruction, legislative dilution and the crazy minorities. Look no further for evidence than Clive Palmer, Jacqui Lambie and Pauline Hanson to validate this viewpoint.

Let our house of representatives be exactly that. Let them represent our communities and their viewpoints. If they get it wrong let their communities lay down judgement on them. The real house of review should happen every three years through the ballot box. No political party can put through its promised agenda from an election with a rogue or obstructionist Senate, which except for the rare occasion we have received with nearly every federal government.

Once an election has been won or lost I want that successful party to be in a position to implement the promises and policies they would have put forward during the election campaign. Let them then be answerable to us the voting public. If there was any drastic intervention required due to incompetence or corruption the governor would have the power to step in. In Queensland, there is no Upper House and it doesn’t affect them, bring it in federally.

It would take a courageous politician to take these two policies to an election or a referendum as they would be effectively ending the careers of a number of politicians, especially those who have become comfortable living off the public purse. However is this what politics should be about? Conviction, leadership and courage?

If these changes were affected we would have more politicians that made the best arguments and convinced the most people to entrust them with their vote. After all who takes much notice of who they vote for outside their preferred parties candidate?

With the removal of the Upper House our federal governments would become more accountable, no more excuses, no more passing the buck or throwing others under the bus. If you win the election you will be unimpeded in being able to implement your policy platforms and programs and new laws as required. Get it right, govern responsibly, keep your promises or else we will be coming with baseball bats.

The removal of the upper house would also give the government the spine they needed to address issues of national concern such as ballooning national debt. Whether you agreed with Joe Hockey’s first budget in the Abbott government, we will never know if their budget measure could have reigned in that debt. They should have been given the opportunity to implement them, instead, a hostile Senate blocked them, came up with no alternative measures and our debt has continued to rise and rise. With no upper house, the Abbot government could have implemented their budget measure in the first year of their government in the hope in the second half of their term the nation would see the benefit of those measures in reduced national debt and spending and the creation of that long forgotten budget result, a surplus!

With a result like that there is a big chance, the electorate would have forgiven them for having to take the tough medicine. What government would have that courage right now in our current system?

It’s my humble opinion that these two changes would go a long way to fixing our current broken system of politics and poor governance in this country. Our biggest issue to reaching this resolution is to discover the politicians that would have the courage to take these changes to the electorate and to, more importantly, carry the public debate on why they are necessary.

If we don’t, then lock yourself in for more of the same madness from the past ten years for the foreseeable future.

Christianity, why it is needed now more than ever.