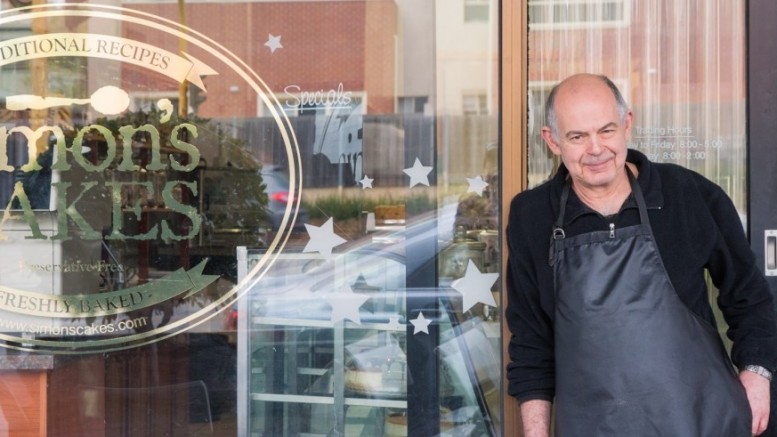 Is there nothing better than freshly baked food? 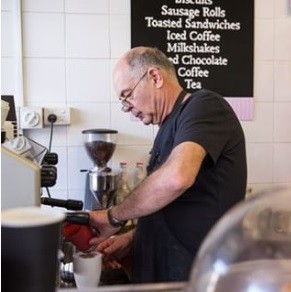 At Simon’s cakes in Ormond, they think so, especially when they bake their cakes in the traditional way without preservatives.

Simon initially had his business established in Centre Road in Bentleigh East but moved to the Ormond, North Road Shopping strip in 2013 after his business was affected by constant road works.

Simon has been cooking for 30 years and also serves coffee, tea and hot chocolate.

Simon has a fascinating background. His parents were Polish Jews who escaped the holocaust in World War two by fleeing to Russia. They immigrated after the war to Israel where Simon was born, the youngest of two children, where he grew up and initially began a career as a fitter and turner.

Simon at 18 had to serve his compulsory three-year service in the Israeli army. When he returned home from this service, he found most of his friends had married and even started their own families. Simon wanted to see the world first before settling down, much as our current generation do today. This led Simon to travel down under in 1977. On the same day he landed in Melbourne, ABBA also hit our shores and Simon simply couldn’t believe how madly in love Australia fell for this Swedish pop group.

Simon was taken aback by the coverage Australia gave to a music band no matter how good it was, as anywhere else in the world it would only make the entertainment pages, the nightly news, talk shows, ABBA were everywhere. This won Simon over instantly to Australian’s more relaxed attitude to life and its isolation from the rest of the world and its problems. At this point, Simon decided he was staying down under.

Simon doesn’t think Australians appreciate what they have in this country and that they should complain less and enjoy life more. I can’t help but agree.

In 1978, before coming to Australia Simon was working and living in Israel operating five lathe machines from one central computer in a modern mass production process. His workplace was supplying the army with various parts. When Simon immigrated to Australia to work in a business here, he was allocated to a 1944 lathe machine that had been made to make cannons for tanks in the second world war.

This particular machine was missing parts so Simon approached his foreman who was 50 years his senior and advised him of this. The foreman then asked him “What did they use to do when you didn’t have these parts for a 40-year-old machine?” Are we going backwards or are we going forward?

This company that Simon was working for was one of Australia’s largest manufacturers with one of Australia’s wealthiest families behind it. At this point, Simon realised that if this is how this sort of company was operating then the country didn’t have any manufacturing needs or wants and figured the generational divide with his foreman would make work too difficult. So Simon thought what am I good at? I am good at food so let’s try something in that area. This led to Simon in 1981 starting his own deli business in Chapel Street, Windsor.

He started with a takeaway Deli shop providing sandwiches, coffees and of course cakes. At this time he was sourcing cakes from outside his business.

One day while shopping Simon bumped into one of his customers who stopped to have a chat with him. His customer proceeded to tell him how bad those cakes that he was selling actually were. Shocked by this feedback Simon went home that night and asked his wife (then his girlfriend), how do you make cakes? So they got out a recipe book and began baking and Simon from that point on could at least take accountability for his produce. Far from just taking accountability, Simon became so good at it that four years later his customers were lining up for his cakes.

“One doesn’t know how good one is until he tries. You live and learn and die stupid.”

From there, Simon focused his business on cakes.

Red Tulip was next to Simon’s De

After five years Red Tulip had closed its doors and Simon was vindicated. Simon explains it this way, 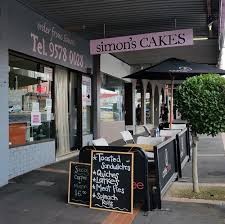 nobody knows what the economy will be doing in five years’ time, what bureaucracy will change, government fees will be increased or new ones introduced along with increased regulation. In other words, five years, or from Simon’s perspective any planning, is too far out and has too many variables. Simon simply makes the best cakes he can and his customers keep coming for more. In sport one of the most commonly used principles by a coach is the acronym KISS (Keep It Simple Stupid). I have a feeling Simon would buy into that philosophy.

n he started in 1981 as there was less regulation.

Simon eventually moved his business into a shop in Bentleigh East, but six months into his lease at Bentleigh East, the State Government decided to commence road work on Centre Road where nobody could get to his shop. Simon showed great initiative at this point and rather than waiting for customers to come to him, he began to sell his cakes wholesale to other shops. This lasted for 30 years.

After 30 years Simon had to relocate as his landlord was pulling his building down to build new shops and dwellings. So he moved to the shop at his current location in Ormond.

Simon doesn’t keep records of how many cakes he bakes; in fact, Simon goes against convention and doesn’t bother with things such as a business plan, despite being encouraged by friends and family to complete one. As he has been in business for 38 years, Simon is living proof that there are lots of different ways and no one correct way.

Simon’s advice for anybody starting out in business is simple “hard work, realising what hard work is and not just saying it but actually doing it.” People are too quick to dodge hard work, he will continue his work until “his body doesn’t allow it any more”. Simon reflects “Ok, you want a holiday take a holiday, two weeks, four weeks, six weeks…… what then? A hobby, well my work is my hobby, I go back to work.”

Simon certainly practices what he preaches. He works between 80 to 120 hours a w

eek, he arrives at 5:00 am, opens his shop at 8:00am and says that he just keeps doing what’s next for the rest of the day, sometimes up until 7:00pm. Simon doesn’t take days off, he is open to the public Monday to Saturday and uses Sunday for preparation for the following week. His only days off are on public holidays.

Simon is a big believer that you never stop learning and that making mistakes is all a part of the process. “This is fine as long as you learn and improve from those mistakes.”

Simon has known friends who have worked for twenty-five years, retired and then a few years later they unfortunately die. Not for him, Simon is convinced that a good work ethic and an active life are keys to longevity.

Simon doesn’t have many issues that he has to worry about. In fact, he is very relaxed and from his perspective “The government has to do its job and I have to my job and that’s it, I can work around any legislation.” Simon is a sole trader with no employees, so he doesn’t have the issues of a payroll tax, superannuation etc.

Simon’s business attracts customers through the door, on the phone and like most businesses 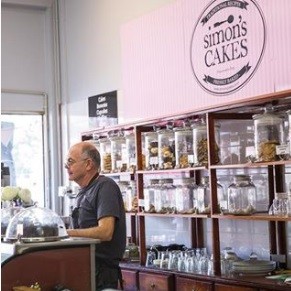 these days through the internet via his Website, Facebook page and Instagram page, all of which were set up for him by his son-in-law who works for Mushroom records in marketing. Simon is fortunate to have a leg up in that area over many other small business owners.

One bit of advice for any business owner or any person is “If something goes wrong it’s not the end of the world, get up and do it again the next day. If you wake up the next morning and the sun still shines you are ok. Sometimes things look like the end of the world but it’s not really.” Great advice in these days of little resilience. “Obstacles are always in front of you, there are always obstacles, just keep getting up the next day and do what you have to again.”

Simon loves Australia’s isolation from the rest of the world, “yes we are a long way away, but we are a long distance from the world’s problems too”. Maybe not enough Australians appreciate this fact.

Simon’s final thought on his business is that he would like to be busier but he is not going to live to make money, “what’s the point of that? are you going to take it with you when you die?” To me, Simon has a simple yet balanced approach to life. Find a job doing what you love, work hard, if you fail then learn from your mistakes and get up and go again, earn enough to keep you happy and no matter what happens if you wake up the next day and the sun is shining you’re having a good day.  Little wonder he has been in business so long.

So for birthday parties, weddings or any event that you need a cake, or any time you would like a cake, get in touch with Simon. Even better, do what I did, drop into his shop, have a coffee, have a chat and order a cake. Check out details via his website below.