The world can be an incredibly small place at times, this is amplified in the sporting world. When I arrived at the Royal Avenue Tennis courts in Sandringham to interview it’s manager Tim McKimm,  I was extremely curious to find out whether Tim was related to a boy I had coached at basketball as the McKimm surname isn’t that common. Turns out Tim was the boy’s uncle and our conversation had started.

This certainly wasn’t the only common denominator throughout the interview as we also discovered we both enjoyed the pleasure of coaching Chris Dawes as a junior before he went on to become a premiership player at Collingwood in an AFL career at both the Collingwood and Melbourne football clubs.

Tim McKimm has been involved in tennis as a player and coach since he was 15.

When he was younger Tim’s mum pushed him to become involved in sport, a not uncommon occurrence back then. Tim’s first sport was cricket but this immediately started in an inconspicuous manner when Tim rocked up to his first cricket wearing shorts while all his teammates were in the traditional long trouser whites. Tim stuck out the season and his claim to fame was holding an end up while a teammate made a hundred, but Tim was never quite comfortable chasing a red ball around. After this experience, Tim looked for another sport and a mate at school approached him about hitting a green ball as opposed to chasing a red one by having a game of tennis after school and despite losing 6-0 the tennis bug had well and truly bitten Tim. 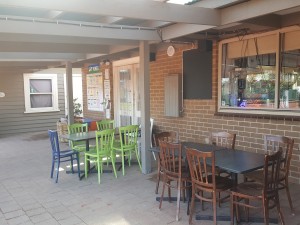 Once hooked Tim recruited his brother Nick and another mate to refine their tennis skills in numerous self-organised childhood classic confrontations. Like so many other kids of that era organised coaching was rare, but long summer days and evenings were occupied in the backyard or at their local tennis club, St Leonards’s Tennis Club local courts mimicking legends such as Borg, McEnroe, Agassi and Lendl.

Tim progressed to reach section 1 competition as a junior and grade one pennant as an adult. In fact, he progressed so well he decided to chance his hand on touring the European circuit in countries such as France and Spain. These were not the major tournament we all see on television but were lower scale ATP satellite and money tournaments held across Europe.

Tim played a lot of satellite and money tournaments in France and initially he was caught out a little by not realising the travel required between tournaments and the planning that was involved. It was a challenging experience for a young man from our leafy Bayside suburbs from the other side of the world. Travelling with tennis mates there was not a lot of money and everybody was trying to breakthrough and on this sort of tour, some of their most challenging issues were not their opponent across the net.

Tim remembers one amusing incident where two of his fellow players he was travelling with couldn’t sleep as another touring player they were sharing a room with was a terribly loud snorer and was keeping them awake the night before a tournament. In a daring night raid, Tim and two mates managed to drag a double bed mattress, to an upstairs room in a Spanish hotel without the manager catching them to try and alleviate the problem. Unfortunately, the walls were too thin and the problem continued, & they could still hear the player snoring on the lower floor. Not the ideal preparation before playing and something the likes of Nadal and Federer I am sure don’t have to contend with.

While not reaching the heights of grand slam tennis Tim was grateful for the experiences these tours provided and a highlight was when he trained with Paul McNamee for three days when he at the peak of his powers and had been previously ranked number 7 in the world.

Tim loves the modern game and especially the big three in Nadal, Federer and Djokovic and believes they would be champions in any era. He also thinks there are plenty of potential champions coming through but we just don’t see enough of them due to the dominance of these champions.

Tim has meet Nick Kyrios a number of times and while acknowledging some of his behaviour on the court could be better, he also finds him to be a really nice guy away from the court and what we see through the media. Tim wonders whether all the attention he receives wears on Kyrios and contends that he has already a good career but hopes he can knuckle down to realise his true potential. So say us all!

Happily, for Tim the kids, he coaches are all well-behaved kids who have never created problems for him ensuring a great atmosphere and environment at his Royal Avenue club.

Initially, after Tennis, Tim was going to get into the building business through an apprenticeship with his brother but when his brother went into a different type of building business Tim decided to pursue some Tennis coaching. The proverbial fork in the road. Over a three week period, he advertised his coaching service which attracted his first two students which built into ten hours of coaching. From that word of mouth spread and Tim’s coaching days had commenced and he has never looked back.

From there St Leonards College approached Tim to help out with coaching at the school and this ultimately saw him appointed as their tennis coach in an arrangement that lasted 24 years. Through this time Tim also secured coaching gigs at St Leonard’s Tennis Club which lasted 29 years and numerous other clubs & schools to build his profile and business.

Fifteen years ago Tim decided to advance his coaching and travelled to Florida in the USA to look to become a qualified coach. Amongst those lessons and seminars, Tim enjoyed an experience of a lifetime having the opportunity to have a photo with legendary coach Nick Bollettieri.

Then in 2008, the lease at Royal Avenue became available. Tim successfully applied for the lease and all of a sudden was managing a 14 court facility. While excited 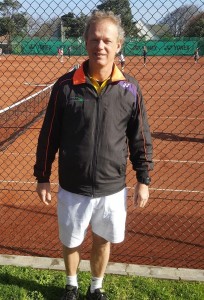 at the prospect, Tim was faced with the challenges of starting things from the ground up and not really knowing where to start and had to learn as time progressed through trial and error.

Despite these challenges confronting him, Tim has successfully developed both the centre and its playing numbers. McKimm Tennis invested $270,000.00 in resurfacing the fourteen courts at Royal Avenue in Sandringham.

Tim’s work in improving the Royal Avenue facility was recognised last year when the Royal Avenue courts were rated the “Best Courts in Bayside” by an independent auditor employed by the Bayside council.

From these beginnings, Tim has built an extensive and varied tennis program that today offers tennis competitions and programs to players of all ages and standards

Currently, at Royal Ave, McKimm tennis provides a variety of competitions throughout the week catering for all age groups and standards these include the following

Tim is keen to expand on sponsorships for the club and is open to business sponsorships at the courts. With so many programs and people walking through his doors it could prove to be a fruitful relationship for any interested business.

For further details on service, costs contacts, bookings etc you can go to the McKimm Tennis website at www.mckimmtennis.com.au

Tim has been coaching tennis for 35 years and while he is proud of his tennis centre and the work he and his team have put into it his goal is still fo discover that wonder kid to coach to be great one day. Who knows we may yet see Tim in a courtside box at a major overseeing one of his proteges to a title, I am sure that night there will be no need to be worrying about a mate’s snoring from the room above.

In the meantime, if you are looking for a casual hit of tennis with a friend, some more serious competition, training for yourself or a member of your family or maybe just a place where you can enjoy a coffee while your kids are occupied, then Royal Avenue Tennis Club is the place for you.

From The Coal Face – The Hobson Stores Story

Be the first to comment on "McKimm Tennis a Royal Affair for all ages and standards!"