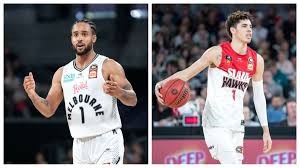 Without a doubt, the most impressive squad I have seen so far is the Sydney Kings.  New coach Will Weaver has done a great job in restructuring this squad to provide it with balance, experience and class. While everybody has talked about the pairing of Andrew Bogut and Casper Were I think the Kings have scored the recruit of the season. While the likes of Lamello Ball and R.J. Hampton have received all the publicity, Jae’Sean Tate to me has been the most impressive for what he brings to his team. Playing as undersized forward he displays strength and skill in equal measure, on defense he always plays against bigger bodies and simply out-muscles and outworks them. As a junior coach of thirty years, he is a great example to my players of effort and hustle combined with defensive smarts. More importantly, he can defend both on the perimeter and inside.

This gives the kings great flexibility with their match-ups and their ability to play small ball if and when when required.

The Kings have a put together a squad with great balance, experience, scoring and most importantly “smarts”. The recruitment of Casper Were was a masterstroke and you can see he and Andrew Bogut have already built an on-court relationship and understanding that would normally take years to build. It will only get better.

Kevin Lisch, Shuan Bruce, form a great backcourt rotation with Were that combines scoring, defense and a high basketball IQ. With veterans, Derek Kickert and Brad Newley in the forward positions the Kings have players that can hurt you quickly. Topping things off nicely is their next stars recruit Didi Louzada who after starting slowly has really found his feet in recent games.

The team most likely to challenge is Melbourne United, after a slow start to the season, they are beginning to go from strength to strength, they have depth and quality and can lay claim to the best centre in the league in Shawn Long. Yes that’s right, when he is playing at his best I rate him ahead of Bogut. They have the consistency of veterans such Goulding, Barlow and McCarron, while the addition of Melo Trimble has covered the loss of Casper Were nicely. In fact the longer we move into this season the more you see Trimble running the show as a good point guard should. He will only get better for United the longer the season progresses. Lingering in the background is the injured Casey Prather, if Melbourne can get him back on the court for an extended period he could provide them with the x-factor to once again challenge for the title.

In my opinion, these two teams lead the pack by a considerable margin. Many would have penciled in the Perth Wildcats to challenge them but with two losses to the Cairns Taipans, some inconsistent form and an injury to star guard  Terrico White they have been exposed a little.

Meanwhile, the battle for the fourth and last spot in the playoffs is wide open with new franchise South East Phoenix and Adelaide 36er’s the most likely. There are a number of wildcards who could upset those calculations. The Brisbane Bullets have the talent but don’t seem to be able to defeat the elite teams above them, the Cairns Taipans look great at times and two wins over Perth demonstrate their capabilities, but three losses to Illawarra also show their capabilities at the other end of the scale. The two teams with the main next stars players in their roster in Illawarra and New Zealand look to have a struggle ahead of them. New Zealand, in particular, look like their season is close to over, despite promising performance against strong opposition early in their season.

The next stars program is already proving to be a winner. Despite their teams struggles RJ Hampton and Lamello ball have brought excitement to the league and especially to fans of those two struggling franchises. Even if New Zealand and Illawarra miss playoffs as looks likely, the fans of these teams will be able to enjoy the emergence of future NBA players. Lamello Ball, in particular, has played with a maturity beyond his young years. It’s crazy to think that just over twelve months ago this young man could have been playing U18’s in our VJBL competitions in Melbourne. What’s more amazing is that from all reports he has not been exposed to structured coaching or systems in the past, now that he is in those systems he will simply go from strength to strength. In my humble opinion he already demonstrates more potential that his famous brother Lonzo Ball.

To emphasize this, at the time of the writing this article this author just watched Lamello become the youngest player ever in the NBL to record a triple-double to lead his team to yet another win against the Taipans. With 32 points, 13 assists and 11 rebounds there is no doubt Lamello is attracting attention from multiple NBA scouts. It was a super impressive performance from one so young.

More importantly, this next stars program will put the NBL on the map for future NBA talent to consider our league as an option over college. It will be interesting to see the NCAA’s response, if any, to this initiative. I believe it will now only be a matter of time before NCAA college players begin to receive remuneration for their talents. Considering the revenue the NCAA competition generates, this will be a long-overdue development.

Some more general reflections from the first eight rounds.

Somebody needs to teach Dwayne Russell what a eurostep is and while there at it show him what an offensive foul looks like. He also needs to come to terms with Casper Were having left Melbourne United, we get it Dwayne you’re upset.

South East Melbourne Phoenix have a quality unit that can play attractive basketball, but I will never attend any of their home games and when watching on TV I now hit the mute button. Over the years NBL DJ’s/Courtside announcers have been infatuated with continuously playing loud ugly music instead of allowing crowds to become involved in the game. The current announcer/DJ is for the Phoenix is not just the worst in the NBL but the worst on the planet. If you are going to play music non-stop at least ensure it fits the game. Not only is the music loud but it’s awful as well, it’s like an 80’s night on steriods at times.

To make matters worse that also have a college-style band which would be good if they could play music.

Larry Kestleman has down wonders dragging the NBL back from the precipice of extinction, but he should research some of the Euroleague games where they allow the sounds of the game to draw the crowd into the match, the same with the NBA. I want to go to a game for the basketball experience not to have my eardrums tortured while leaving the venue needing some aspirin for the headache that I pay to have inflicted upon me.

Maybe NBL clubs can check out the Sydney Kings whose match presentation gets the balance right. One last beef, get rid off your hyperbole anchorman on your broadcasts. Allow your genuine basketball brains to commentate matches, some of the commentaries from the likes of Dwayne Russell and Lachy Reid is just plain cringeworthy.

Finally, it would be nice if the referees stopped inserting themselves into  matches so much, common sense seems to have left the game. The best referees use to not call the minimal contact fouls if they did not put a player at a disadvantage and that’s the way it should be. Today referees seem to be taught to call any contact they see no matter how minimal. As a spectacle, seeing both teams rack up four teams fouls in five minutes ensuring fans witness a steady stream of players marching to the foul stripe for the rest of a quarter is a guaranteed way of ensuring fans lose interest in the game.

The game’s rules pendulum has swung too far towards the advantage of the offensive player and it needs to be reset to give the defense a greater chance of being able to do it’s job.

It’s been an entertaining eight rounds, lets hope teams lower down the ladder can get their acts together and really string together a run of wins to make the race for playoff spots interesting.